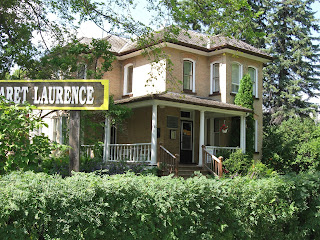 We're just back from a six-week road/camping trip across our great land. Only a budget-deflating mechanical breakdown kept us from a trip to Vancouver Island to visit the Purdy's ocean-side house in North Saanich, and to enjoy a beverage at the Waddling Dog in Esquimault, which occasioned the delights of 'No One Else is Lawrence' a beery collaboration between Al Purdy and Doug Beardsley (Harbour Publishing, 1998).


But there were compensations.

In Neepawa Manitoba, we enjoyed a Margaret Laurence pilgrimage. Neepawa, of course, was the model for Laurence's fictional town of Maniwaka. So many threads of her life there were woven into the novels. An especially significant strand, for lovers of Purdy's work, was the literary friendship between the two Canadian writers, which flourished between 1967 and 1974.

After Laurence's death, John Lennox edited the collection and created the wonderful 'Margaret Laurence-Al Purdy A Friendship in Letters' (1993, M&S). His introduction to the book tells the story of the literary friendship so well that I shall not even attempt it.

At one point, Laurence, in self-imposed literary exile (as it turned out) in UK, provided sanctuary for Al, and, more importantly, for a very ill Eurithe. I wonder if Eurithe, that woman known for offering copious amounts of tea, might have enjoyed tea from this very pot I found  repatriated, and shined within an inch of its life,enshrined  in a museum in Margaret Laurence's grandfather's home in Neepawa, where she lived until she was 18.


From Al, for his friend Margaret:

"We argued about things
whether you should seek experience
or just let it happen to you
(me the former and she the latter)
and the merits of St. Paul
as against his attitude to women
(she admired him despite chauvinism)
But what pitifully few things
we remember about another person:
me sitting at her typewriter
at Elm Cottage in England....

...then going away to hunt books
while my wife recuperated
from an operation...

Posted by Ancestral Roofs at 4:59 PM