On our trip to the country north of Belleville this weekend, I made a long-hoped for stop at McArthur's Mills. No mill stands beside this pond today; instead a homey B&B gives the spot's beauty more attention that it got in the old milling days.

This is the loveliest spot in the village. The one business was a very busy gas-grocery-LCBO complex in an old house. We stopped in the crowded parking lot, and I dashed across the speedy highway to take a moment, and a photo.

A few scattered village houses, then back into the silence of the country. On a farm such as the one above, carved from the forest and rocks, was born one Eurithe Mary Jane Parkhurst. In early years here she learned her determination, her make-do attitude, her strength and forbearance, her practicality, fearlessness and imperturbability.

She needed all of those as she made her life with Al Purdy.


It seems to me, in coming to know her, in learning their story through Al's autobiography, and in appreciating the stunning poems which she inspired, that Eurithe is too often underestimated - for her wit, her perceptiveness, her astonishing intelligence, her vast literary knowledge, her understanding of the world through a well-travelled life - relegated perhaps to that practical shadowy figure who fed authors and put up with shenanigans. But I don't need to speak for Eurithe.

Al can do it. In the poignant preface to his last book 'Beyond Remembering' , poems selected by Al and editor Sam Solecki, Al Purdy creates a image of Eurithe in this interchange:

"...And to thank Eurithe for many many reasons. I said to her a moment ago, 'What does it feel like to live with someone who write poems most of his life and yours?'
She said, 'To me it feels normal. I can't compare it with anything else. It was a life.'
Sure it was a life. But can't I wring even a modest superlative out of her like: 'Al, it was wonderful! I loved every minute of it!' Couldn't she lie a little just to make me happy? I tell you it's maddening to live with a woman who always has to tell the truth...."

Al could do it. And so could his poems. Read The Horseman of Agawa. And there are many many others.

It was quite a life. And still is. Eurithe is a difficult woman to keep up with.

Posted by Ancestral Roofs at 11:46 AM No comments:

"and we must enquire the way of strangers-"

I grew up on a five-generation farm in the (relatively) gentle countryside of Prince Edward County, "the fat south with inches of black soil on the earth's round belly" in the words of one Al Purdy. A Sunday drive for our farmer father was a rare break from work and worry, an opportunity to check out other farmers' industry or lack thereof.

On any tour through farming country, I still hear dad's voice commenting on slovenly fencelines and poorly stored equipment, or fine fat cattle and good crops. On drives into the north (as central and north Hastings County was known) dad would talk about the "poor farms" and sympathize with the futile efforts of the farmers there.  I was awakened to the inequity of land grants, the dishonesty of the colonization road promises, the plain bad luck of farmers taking a stand in this rocky and unforgiving place.

These days, in the hard country of North Hastings county, the resonance is deeper still, as I hear the voice of Al Purdy wherever a turn in the road reveals a tumble-down barn, a log house never replaced by a newer better frame home, a fence going back to the earth, piles of hand-picked stones.

"...a little adjacent to where the world is
a little north of where the cities are and
sometime
we may go back there
to the country of our defeat..."


All quotations are from 'The Country North of Belleville', first published in The Cariboo Horses (1965). Only by reading the entire poem, aloud, preferably in a stony North Hastings field, can the power of this most beloved of Purdy's poems be truly appreciated.
Posted by Ancestral Roofs at 8:36 AM No comments:

The poem made me do it 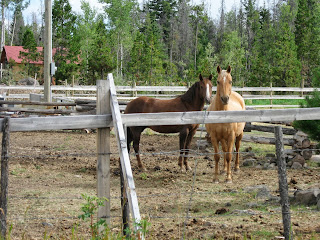 We travelled west this summer, 6 weeks in a tiny trailer, looking at this giant country, following Cariboo gold fever routes and Slocan silver discoveries, hearing the ranching story and the whisky fort clash of first nations and European interlopers, loving the wild nature.

I had never been to the Cariboo, although Denis had in the younger days, desert racing. All I knew is that I wanted to go there. Mostly because of a poem - The Cariboo Horses. Largely because of the images
Al Purdy creates about the world he experienced there in the early 1960's.

" At 100 Mile House the cowboys ride in rolling
stagey cigarettes with one hand reining
half-tame bronco rebels on a morning grey as stone....."

and then:
"But only horses
waiting in stables
hitched at taverns
standing at dawn
pastured outside the town with
jeeps and fords and chevys and
busy muttering stake trucks rushing
importantly over roads of man's devising..." 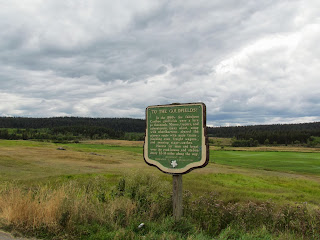 "On the high prairie
are only horse and rider
wind in dry grass
clopping in silence under the tall mountains
dropping sometimes and
lost in the high grass
golden apples of dung...."

Between these pictures, Al takes the reader back to the wild history of these domestic beasts, to their genetic memory - the last Quagga, Egyptian Kiangs, Asian Onagers. Back and forth. As he does. 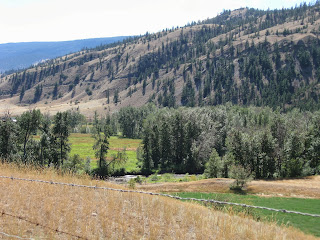 I expected the Cariboo to be the same landscape as the Shuswap, dry sagebrush country, but above Clinton, the hills became more forested and the country...different. For Denis, surprise at  more prosperous and polished towns and cities, outward-looking, with good services for travellers, visitor reception centres. 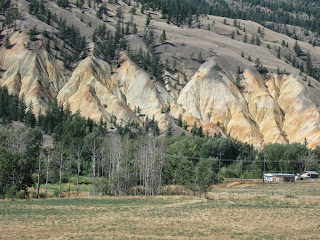 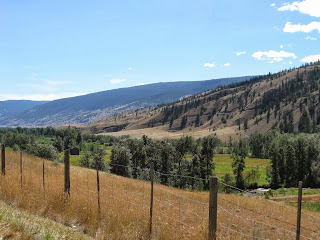 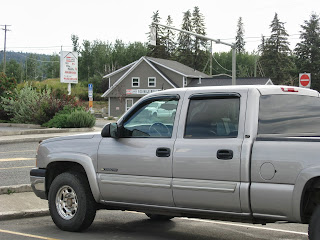 'The Cariboo Horses' ends with an image of horses on domestic errands, standing at the town hitching rail among motor vehicles: "Only horses.....arriving here at chilly noon/in the gasoline smell of the/dust and waiting 15 minutes/at the grocer's." 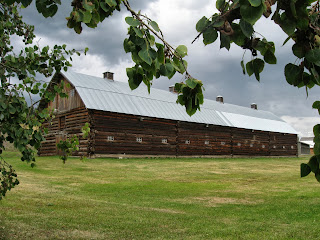 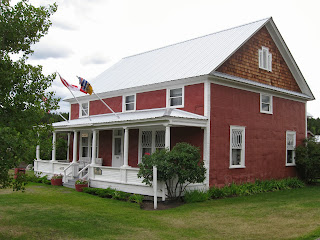 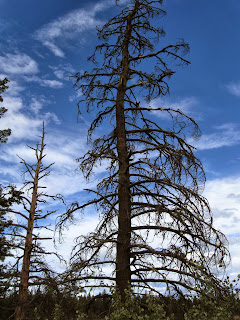 P.S. After careful research I regret to inform the reader that as of August 2013, the domestic pickup has replaced the horse (whatever its lineage) at the hitching rails of the Cariboo.