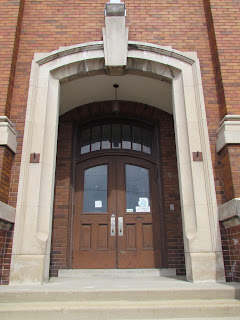 Al Purdy, it is widely believed, was not an academic.

In fact, we take a certain satisfaction from knowing that our beloved Canadian poet dropped out of school in Grade 10. His wide travels and a lifetime of reading and study yielded a fine alternative education. 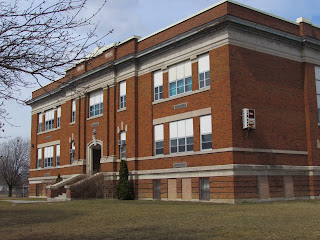 To him, it may have felt as empty as it is now, sitting in a precariously abandoned condition in east Trenton.

Yesterday I spent the day at the fine new THS (not shown), in the company of bright and engaged creative writing students, and their inspiring and enthusiastic teachers. These senior students talked about their adaptations of Al Purdy poetry -  into screenplays and a film, a character's photo album, short stories - and their feelings about Al's legacy.

I will talk more about them in the summer issue of County and Quinte Living magazine.


In 2011, THS dedicated its fine new Al Purdy library to the school's most famous alumnus. The library project was spearheaded by physics teacher Eric Lorenzen and his equally dedicated and creative colleagues. Outside the busy and welcoming library is a showcase containing Purdy memorabilia.

Issues of the school's yearbook from the 1930's containing Al's first published poems, certificates and a copy of Al's less than bragworthy report card, even boards and a brick from his childhood home at Front Street, are tucked carefully inside.


Art teacher Anne McDonald created this astonishing relief sculpture of a slovenly Al opening a book to reveal its rich and endless secrets.

Ms. McDonald was also behind the mobiles suspended from the library ceiling - drum-shaped Underwood typewriter keys, art projects that the six students recalled contributing to way back in Grade 9.

On the library wall is a quote from Al's poem 'What it Was', in The Cariboo Horses (1965), the very book which is enshrined in the display case outside. I wonder how many  future Canadian poets might sit in this very library, and identify with these same lines? Thank you young friends, for your insights.
Posted by Ancestral Roofs at 1:53 PM